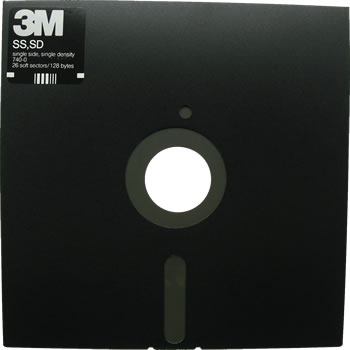 1967 IBM was planning to develop a portable data carrier, which on the one could easily inject code into their System/370 and was also cheap to produce, so customers could be supplied with software updates.
The first floppy disk was developed in 1969 by a team of researchers led by Alan Shugart. The disks were 8 inches high, which corresponds to 200 mm, and had a capacity of 80 kilobytes (KB). The first floppy drives, however, could only read but not write. This made them still not capable to the older storage media such as punch cards and magnetic tapes. Although on a floppy disk was enough space for data, which had to be written on about 1000 punch cards.
In 1972 Memorex solved this problem and released a drive (Memorex 650), with which it was possible to write floppy disks. At this time, Alan Shugart no longer worked for IBM but for Memorex and was significantly invovled in this development.
One year later IBM released their read-/write drive, the 33FD. In this drive the write head was provided with a teflon coating, resulting in increased life of the storage media. Trough this and some other developments, the volume of data on disks could be increased up to 250KB. The teflon coating on the writing instruments and the disks is known as the Single Sided Single Density format (SSSD-format).

In 1973, Shugart left Memorex and started his own business, Shugart Associates. That company was one of the leaders and developed the SA800, which became the industry standard in the field of eight inch floppy disk systems. The problem with the drives of that time was, that they were almost more expensive than a full computer. This meant that usually punch cards and magnetic tapes were used as "removable storage media".
1976, IBM introduced the Double Sided Single Density (DSS) 500 KB format. One year later IBM released the 1 to 1.2 MB Double Sided Double Density format (DSDD-format).